Showing posts from October, 2017
Show all

PAGASA AS CONTRIBUTOR TO PILIPINO MIRROR 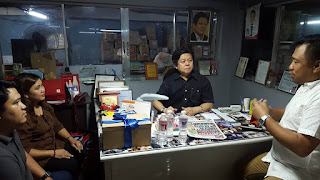 PAGASA was invited on 11 October 2017 by (L-R) Cris Galit and Mina Satorre (both of Filipino Mirror Media Group Corp.) and Marvin Nisperos Estigoy/ VP of Business Mirror to become a contributor to the Pilipino Mirror/the 1 st Business Tabloid in the country.  STC will bring up the kind offer to PAGASA Members at its next Gen. Meeting on 25 Oct. 2017 for approval.
Post a Comment
Read more

INTERVIEW ON THE ADMINISTRATION’S TRAIN PROGRAM 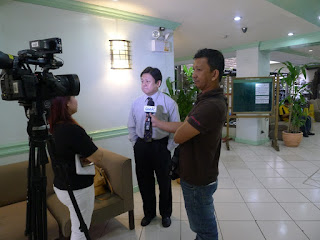 On the side of the public hearing on the sale of fresh produce and fishery products at the U.P.’s University Hotel on 10/24/17, PAGASA’s STC was interviewed by GMA-7 regarding the potential increase in prices of basic necessities and prime commodities in view of the Administration’s serious intent to push the Tax Reform for Acceleration & Inclusion (T.R.A.I.N.) Program and have it enacted into law as soon as possible.
Post a Comment
Read more

MEETING WITH BAFS ON PNS OF HYGIENIC PRACTICES FOR FRESH PRODUCE 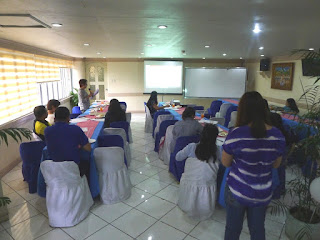 On 24 October 2017, the DA’s Bureau of Agriculture and Fisheries Standards (BAFS) held a public consultative meeting for the revision of the Philippine National Standard (PNS) Code of Hygienic Practices for the sale of fresh agriculture and fishery products in markets and authorized outlets at the University Hotel of the U.P. Diliman Campus.  PAGASA was invited as a Resource Person when it came to requirements of  supermarkets in the hygienic delivery of fresh produce and fishery products to make them more marketable.
Post a Comment
Read more

PAGASA was invited to a hearing on the Congressional Committee on Food Security on 10 October 2017 to act as a Resource Speaker on food wastage in supermarkets. PAGASA Pres. Steven T. Cua attested to the fact that supermarkets have practically zero wastage as bad orders are returned to suppliers.  Having explained to the members of this Committee of the industry practice regarding bad orders, STC requested that supermarkets be excluded from being mentioned in the proposed bill.  However, the Members of the Committee argued that even if that is the case, they see no harm in adding supermarkets to their list of establishments with food wastage (even if there is none) since it will be very difficult to add these establishments (i.e., supermarkets) again in the future should the occasion arise that supermarkets may, sometime in the future, experience food wastage. This being the argument, STC posed no objection to their adding “supermarkets” in their list of establishments to be monitore
Post a Comment
Read more

The biggest Agri-Business Trade Show in the country took place on 5-7 Oct. 2017 at the World Trade Center. On Opening Day, STC represented PAGASA (which Chaired for this Show back in 2007) with Special Guests Jose “Joey” Concepcion III-Pres. Adviser on SMEs and Mr. Roberto “Bobby” Amores (both in coat beside STC in group shot by red vidi screen). This year’s Show was Chaired by the Durian Growers Association based in Davao (picture with STC at DA Booth).
Post a Comment
Read more

SPECIAL MEETING WITH PRA BOARD & MEMBERS 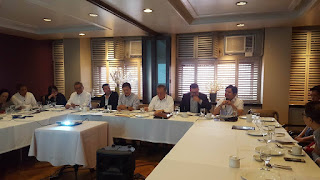 On 6 October 2017, the Phil. Retailers Association called a Special Meeting with available Board Members and select Members to discuss the alarming issue of the government’s intention to open the retail industry some more to foreign investors.  From a minimum investment of $2.5M for foreigners to be 100% owners of a Retail Operation, suggestion was to lower this amount to $200,000 only! Naturally, this alarmed the retail industry. PAGASA represented the food retailing sector of this industry at the Meeting.
Post a Comment
Read more

At a lunch meeting at the Legend Seafood Restaurant across the World Trade Center, the Phil. Chamber of Agriculture and Food, Inc. (PCAFI) held its first major General Meeting to assess the involvement of the various organization-members of this Chamber. Chaired by Col. Alejandro Teves Escaño, this Meeting was handled by PCAFI Pres. Phillip Ong. PAGASA has been designated Chair of the Agri-Supermarkets Committee of PCAFI. Meeting was held after the Opening of Agrilink at the World Trade Center on 5 October 2017.
Post a Comment
Read more 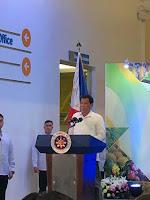 On the afternoon of 5 October 2017, Phil. President Rodrigo Roa Duterte took time out from his very busy schedule to visit Agrilink at the World Trade Center to cut its ribbon for a second time on its Opening Day. PAGASA VP Liansel Sy attended the affair in behalf of the organization and was honored by being chosen to represent Agrilink at a group picture taken at the Affair. He also had his picture taken with Jose “Joey” Concepcion III, Presidential Adviser on Small and Medium Enterprises as well as Chairman of the popular movement for SMEs> Go Negosyo.
1 comment
Read more
More posts