Showing posts from January, 2017
Show all

PUBLIC HEARING ON TAX REFORMS AT THE SENATE 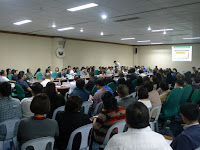 PAGASA’s STC was invited as a resource person to the Senate Committee on Ways and Means’ public hearing on tax reform and to listen to the Dept. of Finance’s proposals in lowering the personal income tax and consumption tax with offsetting measures.  Attending the hearing were Committee Chairman Sen. Juan Edgardo “Sonny” M. Angara and Senators Sherwin Gatchalian, Miguel Zubiri, J.V. Ejercito and Nancy Binay.  Representing the DOF were Usec. Karl Kendrick T. Chua defending the department’s proposals with BIR Commissioner Caesar R. Dulay and Dep. Comm. Nestor Valeriano and BOC Officials. Discussions will ensue after this initial hearing. The Senate Hall was filled to the rim for this hearing on 31 January 2017.
Post a Comment
Read more 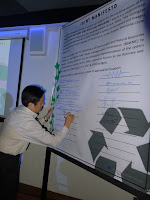 On the 27 th of January 2017, PAGASA was invited to speak to all stakeholders at a Full Waste Recovery and Recycling Symposium held at the Mini Theatre of the QCX Museum inside Quezon Circle. Organized by the National Solid Waste Management Commission, STC gave an account of what PAGASA Members have done and gone through in addressing the issue of improper disposal of plastic bags and how this is adversely affecting our environment.  He expounded on PAGASA’s position of volunteering as a collection agent for used plastic bags so recyclers can get hold of these bags for the purpose of recycling; that the QC Local Government has adopted PAGASA’s Position Paper in addressing this issue which is to engage the whole citizenry in returning these used plastic bags to retailers or else face a minimum penalty for not practicing their role as a responsible member of Planet Earth.  STC ended his stay by signing a Manifesto at this Symposium stating PAGASA’s full support to the shareholders’/Al
Post a Comment
Read more 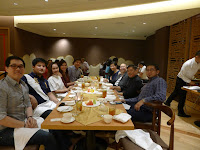 PAGASA held its 1Q 2017 General Membership Meeting at the freshly opened Chinese Restaurant called Red Spice inside Okada Manila.  Barely a month old, the posh casino played host to the Association on 25 Jan. 2017, just a few days before it did this year’s Ms. Universe contestants and organizers after the pageant proper. Discussed were the latest trends and consumer behavior as well as moves by the major players in getting a foothold of the industry. Invited that evening were the former PAGASA Members who have sold their operations to the bigger players to give their retrospective opinion of the how’s and why’s of things when they sold their businesses.  Present for this were: Jaynith’s Supermarket, the SuperBudgetlane Group, Susana Mart and Purity Supermarket. Absent were Sioland (now Southern Emerald), New Life Supermarket and the Parco Chain of Stores.
Post a Comment
Read more 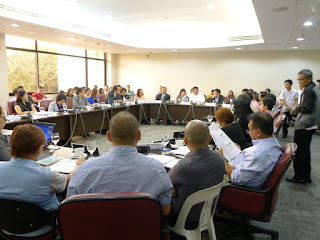 On 25 Jan. 2017, the Special Committee on ood Security at the House of Representatives held a Meeting on “Banning Supermarkets…from Throwing Away and Spoiling Unsold Food” at the Speaker Zulueta Hall, South Wing Annex.  PAGASA was represented by its President STC who informed the well-attended Committee that in general, food retailers return goods which are about to expire to suppliers.  As to what they do with these items, it is the suppliers’ prerogative.  House Bill No. 4263 was filed by Rep. Evelina G. Escudero of the 1 st District of Sorsogon. STC poses for a picture with Committee Chairman Rep. Leo Rafael M.Cueva of the 2 nd District of Negros Occidental and Member Rep. Peter Unabia of the 1 st District of Misamis Oriental.
Post a Comment
Read more 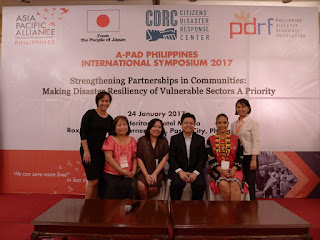 TWG MEETING BY COMMITTEE ON ECOLOGY FOR 17TH CONGRESS 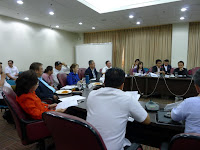 On 16 Jan. 2017, the Committee on Ecology under the Chairmanship of Cong. Estrellita Suansing called a Technical Working Group (TWG) Meeting at the Villar Hall, South Wing Annex of the House of Rep. to discuss the proposed PLASTIC PRODUCTS REGULATION ACT Among those present were former Pres. Gloria Macapagal-Arroyo who was very insistent in passing the said Act within this 17 Congress together with Rep. Suansing.  They proposed to have Supermarket Operators act as collectors (with segregated collection bins) for all types of plastic products (i.e., old wash basins and drums included) as brought to them by the buying public to which STC objected and retorted that limit these to plastic bags and we have a deal.  After all, that is PAGASA’s Position on the collection of used plastic bags to aid recyclers by providing them the correct plastics to recycle (into plastic bags again). This scheme has already been adopted by the QC Government and has been put in place the last few year
Post a Comment
Read more

VISIT TO A REGIONAL MEMBER IN THE VISAYAS 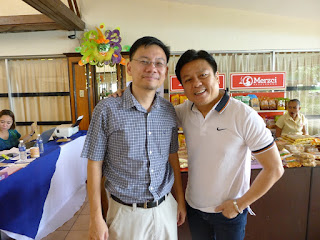 STC went to Bacolod City in the province of Negros Occidental and visited PAGASA’s Member there on 15 Jan. 2017.  Mark Gomez operates two KJ Foodmarts and 26 Munsterrific C-Stores in areas surrounding Bacolod.  Thanks to the boom in Business Process Outsourcing, it has contributed to the mushrooming of C-Stores in Mega-Bacolod.
Post a Comment
Read more 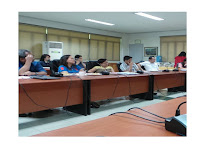 On 13 Jan. 2017, PAGASA’s PRO William Villanueva attended the Consultation Meeting by the National Solid Waste Management Commission (NSWMC) at their office inside the DENR Compound along Visayas Ave., QC to ascertain the needs of stakeholders in relation to solid waste management (SWM) as well as act as a pre-work activity leading to the Symposium on SWM at the Quezon Circle on 1/27/17.
Post a Comment
Read more
More posts