The Department of Trade & Industry set its first National Price Coordinating Council (NPCC) Meeting for the year on 1/22/16 at the Conference Room Penthouse of the Board of Investments Building. NPCC Chairman, newly-appointed Secretary of DTI Adrian Cristobal, Jr., headed the Meeting which he used to handle as Usec. with then-DTI Sec. Manuel A. Roxas II.  The Session introduced the new Secretary to the Members of the Council as well as dealt with Usec. Dimagiba’s urging of manufacturers to roll back prices in view of the continuous price rollback of petroleum prices.  PAGASA was represented by its President Steven T. Cua and Treasurer Mykel V. Teodoro. Close-up of the people at the Head Table (L-R) shows Director Danilo B. Enriquez of DTI’s Fair Trade Enforcement Bureau (in charge of monitoring of retail prices of basic necessities and prime commodities), DTI Usec. Victorio Mario A. Dimagiba, DTI Sec. Adrian S. Cristobal Jr. and DA Usec. Jose R. Reaño.
No comments:
Email ThisBlogThis!Share to TwitterShare to FacebookShare to Pinterest 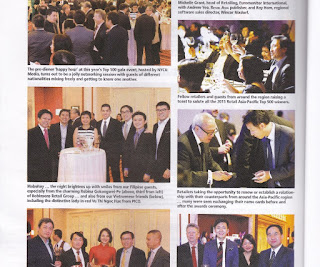 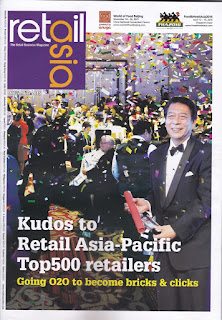 The November 2015 issue of Retail Asia>foremost Asian magazine on the retail scene featured the annual Retail Asia-Pacific Top 500 Retailers Awards Night held at Solaire Resort and Casino on the same eve of the first day of the Asia-Pacific Retailers Conference held at SMX, Mall of Asia Complex.  Invited to this prestigious event was PAGASA’s President Steven T. Cua and its Vice-President Liansel H. Sy. Fortunately, the magazine’s sharp eye caught the two at the early evening cocktails and even invited STC to give his impression of the evening which saw print in the same issue of the magazine. 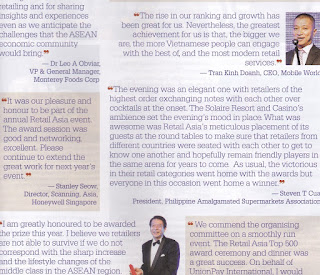 No comments:
Email ThisBlogThis!Share to TwitterShare to FacebookShare to Pinterest

The Officers-Elect of PAGASA for 2015-2017 held its 1st Board Meeting in Antipolo at the quaint and beautifully-designed and landscaped structures of Pinto Museum. The Board (with some wives) appreciated the art pieces exhibited at this unique museum and gave itself a breather away from the hustle and bustle of Metro Manila on the lovely afternoon of 10 January 2016. As they say all work and no play makes the Board Members of PAGASA dull and lacking in creativity to deal with today’s sharp competition in the world of retail.
No comments:
Email ThisBlogThis!Share to TwitterShare to FacebookShare to Pinterest 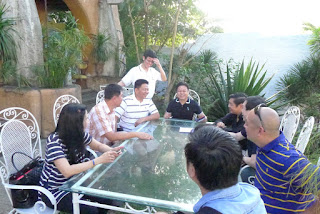 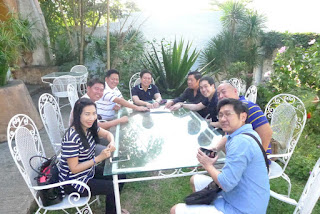 On 10 Jan. 2016, PAGASA held its first Board of Directors Meeting after the new set of Directors were elected by its members at the General Membership Meeting on 29 Oct. 2015 held at the Mall of Asia’s Potts Point Café. Discussed at this Board Meeting were plans for PAGASA’s 30th Anniversary activities, the direction to be taken by the Association for the next two years and the election of officers. Elected officers for the term 2015-2017 were: President - Steven T. Cua/ Welcome Supermart Vice President- Liansel H. Sy/Liana’s Supermarke Treasurer - Mykel V. Teodoro/Velamart Corp. Sec. - William A. Villanueva/Purity Supermarket P.R.O. - Desmond C. Chua/Daily Supermarket Dir. Representing the Regions: N. Luzon - Edna B. Ontiveros/Candice Megamart (Tuguegarao) NCR - Godofredo S. Gravador/Simplicity Ministop (Caloocan) Mimaropa - Arjie P. Lim/Andrew Grocery (Palawan) Vis-Min - Robert L. Go/Prince Hypermarkets/Malls (all over Vis-Min)
No comments:
Email ThisBlogThis!Share to TwitterShare to FacebookShare to Pinterest
Newer Posts Older Posts Home
Subscribe to: Posts (Atom)